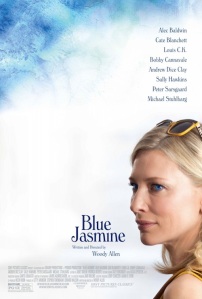 “Woody has snapped to wakefulness, his comic and dramatic synapses firing off with an old ease that’s deeply gratifying. [H]is best in about two decades.”
The Daily Telegraph

“It is pure movie-going pleasure.”
The Guardian

“Want to see great acting, from comic to tragic and every electrifying stop in between? See Cate Blanchett in Blue Jasmine.”
Rolling Stone Magazine

It’s generally agreed that in the last twenty years Woody Allen has rarely hit the artistic and commercial heights of his better known works from the 1970s and 80s. But critics are calling Blue Jasmine the director’s best work in years. Cate Blanchett, as the eponymous heroine, was hotly tipped for Oscar glory and sure enough she lifted the famous statuette at this year’s ceremony.

As we noted when announcing our Spring programme, this story of a deluded socialite brought low by her husband’s misdemeanours wrings every ounce of comedy and tragedy from Jasmine’s plight. It is a well-regarded example of grown-up filmmaking and a welcome return to form from one of cinema’s greatest comic talents.